Thanks to the City of Leeds Pipe Band, Wharfedale & Aireborough Observer reporter Jim Jack was given a once-in-a-lifetime musical opportunity performing one stage with André Rieu.

Here is his first-hand account of taking part in André Rieu’s Christmas concert at the First Direct Arena, Leeds on Friday, December 15.

The original article can be found online here.

THIS was it – we were about to march out in front of 13,000 people to play for André Rieu. 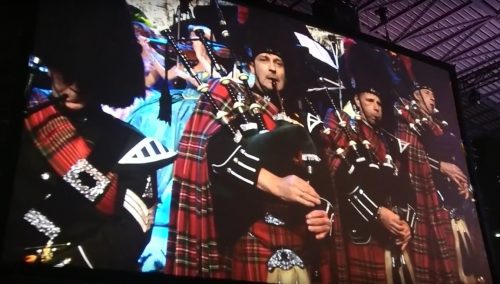 Nothing can really prepare you for the heady mix of exhilaration and terror that comes a few seconds before such an experience.

Unless you have nerves of steel the cliches ring true – your heart actually does start to race, your mouth dries up and you begin to question how you got into this.

For me it was thanks to an invite from a friend, Andrew Neal, who also happens to be the Pipe Major of the City of Leeds Pipe Band*.

The band had needed extra pipers and drummers for the big night so I was one of those drafted in – and a real privilege it turned out to be, too.

We gathered on Friday afternoon to familiarise ourselves with the venue’s layout and the show’s charming ‘Christmas Wonderland’ stage design – and get some vital rehearsal time in.

It was then, in the dazzling but empty auditorium, that we met the great violinist and conductor along with members of his incredible Johann Strauss Orchestra. 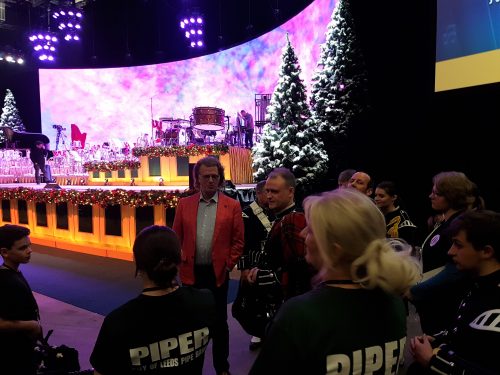 Dressed down and wearing spectacles, he greeted us warmly before talking us through exactly what was needed.

And then came what for me was the highlight of the whole day as, while the band were on stage going through Highland Cathedral, I looked up to see Mr Rieu conducting us.

It was not an experience I will forget.

Equally impressive had been the moment when the maestro, sitting in front row seats contemplating the stage, pulled out his violin and, almost absent-mindedly, began to make some wonderful sounds.

Jump forward five or six hours and the pipe band were playing Highland Cathedral once more – but this time we were in front of a packed house and accompanying the full orchestra.

We had marched out moments before, from each wing of the arena, the band split in two before meeting up in the middle for dramatic impact, and taking the stage to Scotland The Brave.

That certainly seemed to go down well with the audience who were on their feet cheering us on, even if it caused some practical headaches in terms of staying synchronised.

Much of the rest of the night went by in a kind of a blur as we waited, enjoying backstage views of the show on the big screen, to be called out again near the end.

Amazing Grace is an emotional tune to me anyway but joining in, as part of a full pipe band, with the orchestra’s rendition of it took the power of the hymn to a whole new level.

The departing audience streaming outside afterwards seemed to agree as they showered band members with praise for our part in the performance while asking for photographs.

Pipe Major Andrew Neal said: “It was an amazing experience and achievement for us.”

“It was an opportunity we couldn’t turn down and I’m really proud of the band and the teamwork that made the evening a success.”

Band Secretary Robert Procter, meanwhile, summed the experience up with one word: “Awesome!”. 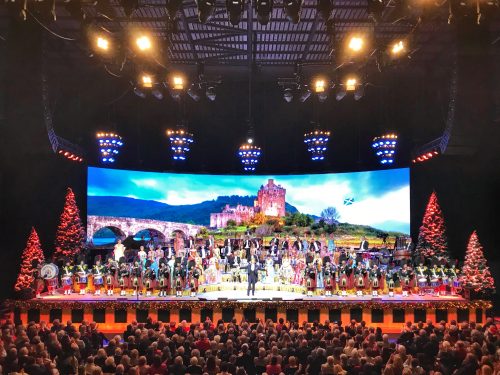 *The City of Leeds Pipe Band was formed in 1960 by former members of the Scottish Regimental Association of Yorkshire Pipe Band (The Yorkshire Jocks).

A self-supporting, non-profit making organisation it participates in many local and annual events including Otley and Ilkley’s carnivals.