Join in the ‘Battle’s O’er’

As published by the College of Piping in the July 2017 edition:

Pipers are being asked to take part in a unique and simple way to mark the centenary of the end of the Great War. The College of Piping is assisting Bruno Peek LVO OBE OPR, founder and pageantmaster with ‘Battle’s O’er – A Nation’s Tribute’.
This will be a mass playing of the retreat march, When the Battle’s O’er outside
cathedrals and other locations 06:00 on Sunday, November 11, 2018.

Many millions were either killed or returned home dreadfully wounded, along with remembering the families and sweethearts that lost husbands while having to stay at home to keep the ‘home fires burning’. At 06:00 on November 11, 1918, the Armistice of Compiègne was signed between the Allies and Germany. It marked the end of the fighting on the Western Front and ultimately the end of the Great War, that terrible, gruelling four-year conflict that saw millions killed and wounded, including around 2,000 pipers. Countries all around the world were affected in what was one of the largest wars in history.

We are asking you to play the Pipe Major William Robb composition, When the Battle’s O’er at 06:00 local time at any location of your choice, whether it is a cenotaph or war memorial in your village, town or city – or even outside your house … any location you feel appropriate. The choice is yours. The most important part is everyone playing the tune together at 06:00 local time. This is the time when the Armistice was actually signed on November 11, 1918. It came into effect at 11.00. 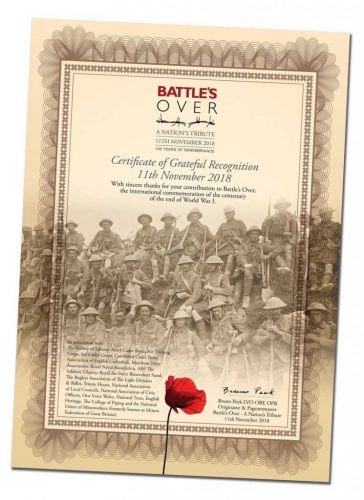 Following the event, those taking part will be able to download the special

certificate (right) that they can then frame as a permanent reminder of their involvement.

To register simply complete email your details
to: [email protected]

The Piping Times will publish a list of all those taking part.

← King Arthur: Legend of the Sword – blink and you miss us!
Tune Origins – Teribus →